Made for the May 2018 MAGS competition, this game is a turn-based strategy game where you manage a colony of rats.  Your purpose?  To survive, and expand!

Forage for food, breed, lay low to fool those pesky humans into thinking you've gone, expand your next, upgrade your foraging, trap evasion and digging skills... don't let your food supply run out or your rats all die off, and if you can, expand your colony to a thousand rats to win the game!

Please only use LEFT-CLICK due to a small (but highly problematic!) bug I haven't had time to fix yet.

This was developed as a prototype for a larger game, which you can find here.  (Currently in Open Beta)

Feedback on the MAGS game so far:

"Solid strategic game. It's not very difficult but it is rewarding as long as it lasts."

"For a MAGS entry this is a really good effort and shows huge potential for development. I played the game to kill 5 minutes. An hour later I was overlord of a huge rat empire. But alas, greed got the better of me and things fell apart very quickly once the humans upgraded their traps. Give it a go- very simple concept that is easy to pick up and play and the balance feels just right!"

The rats' voices jumpscared the hell of of me the first time they popped up but I got used to it and they added so much fun and many a laugh to the game!

I won it on my second try. It was perhaps a little easy once you know what to be careful of. In a future version maybe EASY, MEDIUM, HARD, IMPOSSIBLE difficulty levels could be added? I know it's hard to get balance just right in these kinds of games, especially during a MAGS, but with a bit more time I think it would add a lot to the game's replay value.
Nevertheless, the game provided the fun of slowly growing in power until the things that terrified you before became just minor annoyances. This is the main fun of any RPG/Sim game: feeling that your power and abilities are growing, and that you are overcoming harder obstacles because of this, and this game does it well!
The random events were just frequent enough to affect the gameplay a bit but not so frequent that they become annoying or eclipse the main, central strategy play.
Wonderful game!!!"

"Looks like a good idea and a lot of detail to the simulation. I spent some time trying to work out an algorithm that will keep me alive more than a few rounds but at some point I felt that it just was not compelling enough to persist to the point where I have 1000 rats"  (Yes I'm including all feedback whether positive or not )

"A game about playing with variables to obtain a successful outcome of a family of rats. This game has a single screen and is quite self explanatory. Getting a good balance and moving on was good fun. However, the mouse disappearing was game breaking and quite annoying and MUST be sorted as I would have liked to have gotten further than I had.. Effort went into coding the variables.
All in all a fun game that I could play more of given a fix of the mouse vanishing. I found it quite enjoyable and could spend quite some time playing around with it. Good effort for a nice game. "

(Sorry I can't fix that bug but it won't be in the full version I promise!)

"First time round, took me less than a minute to die... and wonder "what the hell happened?"... Second time I was in a roll and was progressing nicely, until I got a bit carried away... Maybe killing the entire colony before the food reaches zero is a bit unintuitive.
Not really my kind of game, but still nicely made and worth playing. That is if one likes the gender. "  (I think she means genre! :-D)

"Pretty fun. I made it to turn 101 before my rats all died. The graphics are crude, but get the job done. Otherwise I can't think of a single thing that should be changed."  (There will be pretty graphics galore in the main game!)

"It's an interesting turn-based strategy game that was fun, though the font was hard to read. I also think that there is some room for improvement, like having some illustrations for the different events and more visuals to go with the text, but for a Mags game it was decent and the strategy was entertaining even if I never came close to 1000 rats."  (I hope / think the font is easier to read at the higher resolution in the full game)

Unzip and run winsetup for options,  ratpack for the game. 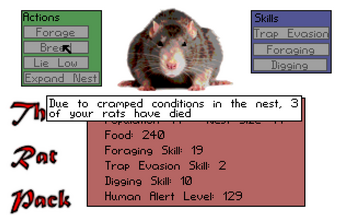 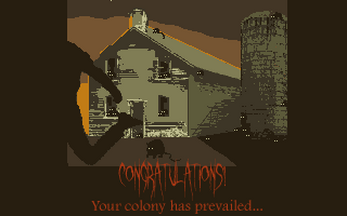